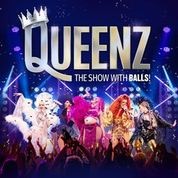 QUEENZ -THE SHOW WITH BALLS!

A life-affirming night of fun and frolics with a bunch of boys who dance like Britney and sing like Whitney!

Featuring 5 vocal powerhouses armed with songs, sass and plenty to say... ready to spread the word, fly the flag and march to an anthemic new beat.

Featuring remixed and reimagined pop anthems from The Spice Girls, GaGa, Shakira, Janet Jackson, Britney, Whitney and everything in between.

Get ready for a non-apologetic, sequin clad pop party, celebrating unity, unicorns, divas and death drops - The night out we’ve all been waiting for!