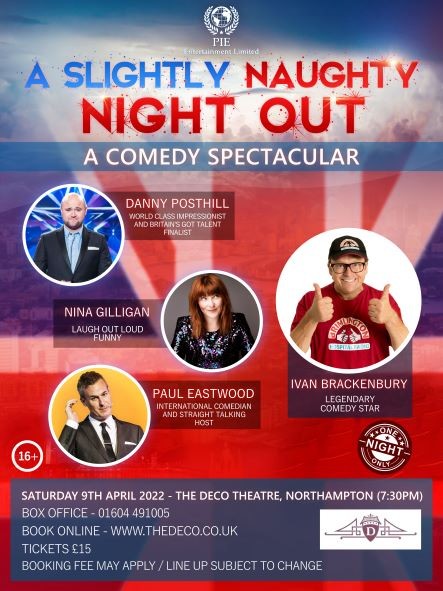 A Slightly Naughty Night Out

PIE Entertainment Ltd bring this comedy spectacular to The Deco for one night only!

Prepare to laugh your socks off and have your funny bone well and truly tickled at this great value, unpredictable evening that promises to be full of pure comedy and non-stop laughs!

Starring a host of the finest and funniest acts on the UK comedy circuit today!

Ivan Brackenbury is the daft, inept yet adorable hospital radio DJ who takes you on a hilarious broadcasting journey, guaranteed to make you cry with laughter. He's a star of 'Live at the Apollo', 'Eight out of Ten Cats do Countdown' and his own comedy shows ‘Hospital People’ BBC1and BBC Radio 2 ‘The Ivan Brackenbury Show'.

Danny Posthill is undoubtedly one of the most promising British comedians around today. He is a well-known and much loved stand-up comedian and impressionist, well remembered for his outstanding performance on the finals of Britain’s Got Talent in 2015.

Award-winning comedian Nina Gilligan exploded on to the comedy scene in 2011 and is now a regular on the UK circuit, performing at clubs and venues all over the UK. A bolshier Mrs Merton, she's not one to suffer fools lightly - so watch out for a razor sharp wit used at will. Her act will leave you shouting for more!

Funny, fast and with a sparkling personality, comedian Paul Eastwood will have you in stitches with his sharp wit and superb stand-up comedy style.

Get buckled up and get ready for a rip roaring night of big laughs from the professional laughter makers.