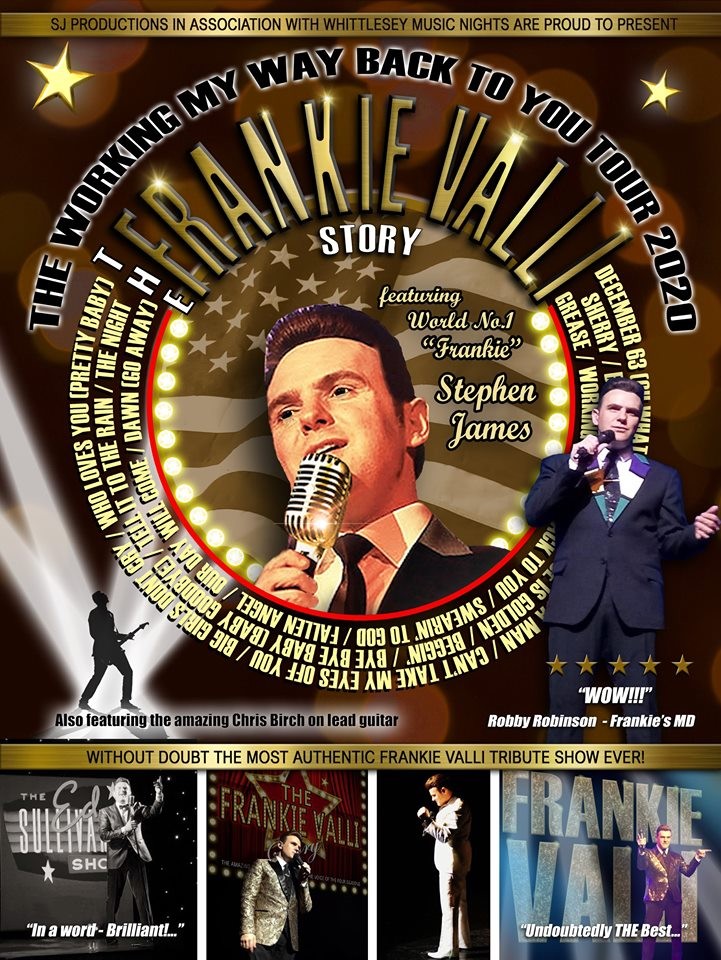 Following a hugely successful six-years or so in theatres, Stephen James has built an undeniable reputation as the UK's most authentic Frankie Valli impersonator ever. Frankie's own Musical Director of 40 years, Robby Robinson, was moved to say "Wow" after hearing Stephen sing at the o2 show in 2018.

There are other tribute shows, most of which perform Jersey Boys influenced arrangements. However, if you want a sound, that when you close your eyes, you imagine you are listening to the real thing, for many, there is only one guy who delivers this in the UK today, and that is the sensational Stephen James.

The Frankie Valli Story, is an intimate, heartfelt story show to one of the greatest bands of all time, Frankie Valli & The Four Seasons. Set against a cleverly-designed video stage backdrop and with the use of engaging narrative, prepare to be taken on a journey from the beginnings of 1962 with the first three consecutive No.1 singles Sherry, Big Girls Don't Cry & Walk Like A Man.

The show ends in 1978, with the last mega-hit Grease (is the word) taking the world by storm. What happens in between is a rollercoaster of ups and downs, with one constant – THE HITS! Lets Hang On, Working My Way Back To You, Ragdoll, Beggin, Cant Take My Eyes Off You, December 63 (Oh What A Night), My Eyes Adored You, and so many more, make this a must-see show.

For this particular tour, super-talented lead guitarist Chris Birch has been head hunted. Chris has been advised by none other than Basil Fung (Frankie Valli's guitarist), and the sound is exactly as you would expect at a Frankie Valli concert today.

With respect, this is not a Jersey Boys tribute show. This is a brilliantly unique Frankie Valli & The Four Seasons story show. Expect concert recreations, original keys and arrangements.

The Telegraph – "As close to Frankie Valli as you can get without seeing the man himself..."

4 Seasons Memorabilia – "We've seen loads of tribute shows, but this has got to be the best!"

PLEASE NOTE THIS IS A TRIBUTE SHOW